What Makes a Healthy Conversation? The Ideal Point of Self-Differentiation. 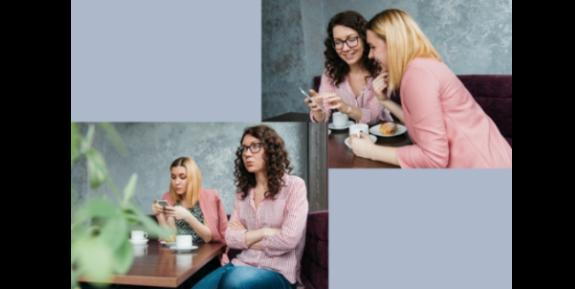 “Please don’t use that name, I’m going by my new name now,” one person says.

“What are you talking about? Why are you saying that?” another responds.

Is this the start of a healthy conversation or not?

Behind every healthy conversation, we find a balance of individuality (knowing self, communicating our own needs) and connection (being compassionate and valuing connection to the other person.) What makes a good balance depends on many factors other than just the words.

Here are some factors and how they could play out in this exchange.

A healthy interaction involves both standing up for one’s values and identity (individuality) and staying in connection with people who have different perspectives. If the person requesting to  be called by a new name speaks in an angry and disdainful tone of voice, the other person will feel repelled, whether they have negative feelings about the name change or not.

Both people have control. It’s harder to stay connected when someone is actively pushing you away. However, if the person is able to respond in a curious and calm tone, this is likely to draw the other person closer. The responder not only acts with good self-differentiation themselves, but increases the possibility that the first person will be able to respond in a healthier way.

On the other hand, if the person requesting to be called be a new name presents the request in a calm and friendly manner, and the other person strongly disagrees with this choice and says, “What are you talking about?!” with anger, then the connection begins to unravel.

Self-differentiation by text is more difficult than in spoken conversation. The lack of non-verbal communication makes it easier to assume the other person is reacting as we assume, or imagine they will. We may write from a well-differentiated place, for example, and be received as aggressive or defensive. Read more about the potential challenges of communicating by text here.

The roles and relative level of power between these two people matters regardless of the reason the first person asks to be called by their new name.

Equal roles and power: If the two people are friends, co-workers, or siblings, who have equal power in the system based on role, and one is not dependent on the other for basic needs or emotional support, then communicating one’s identity, beliefs and needs is easier.  None of these factors stands alone, however. Sometimes expectations from culture, gender, society or other factors of social location make it beneficial to conform, or make it more difficult to take a defining stand.  These added factors can also apply to married couples in which there is truly shared power.

Imbalance of power and role: When one person has power over us as a result of role (boss, manager, parent of a dependent child or young adult, higher earning spouse….), we may have a clear sense of identity in relation to that person, but consciously choose not to communicate values, needs and beliefs.

Sometimes when there is a power imbalance, self-differentiated communication can actually put us at risk of economic or social loss if that more powerful person disagrees. Sometimes the potential risk limits our willingness to speak. In the above conversation, imagine the first speaker has recently changed gender identity and is reminding their boss to use the new name. Much more is at stake for the speaker than expressing identity.

Conversely, when a person with more power takes a clear stand on an issue, it has the potential to be received by people with less power as judgmental, or even coercive. If the boss simply forgot about the name change, or hadn’t yet heard, but is not judgmental, the response, (What are you talking about? Why are you saying that?”) could still be perceived as critical, judgmental or even threatening.

For another look at how multiple factors of social location and role play out in relationships, see my articles on weighted triangles.

Cultural and societal factors matter in determining the appropriate balance of self-differentiation. In American society in this day and age, keeping an ethnic name, or not changing one’s name when getting married, is widely accepted. However, 50 years ago, people were often rejected if they used ethnic-sounding names, and keeping one’s maiden name in marriage portrayed societal defiance.

Today, changing one’s name as a result of a gender identity shift can be met with rejection and ostracism, or with acceptance, depending on the norms of the groups and cultures to which one belongs.

In addition some families and some cultures highly value each member’s individual identity and accomplishments. Some families and some cultures have a strong communal sense of identity. One is not better than another, therefore, different cultural norms can influence what constitutes a healthy balance of connection and individuality in relationships.

Bowen explained self-differentiation on a scale from 0 to 100, with 0 representing complete fusion with others (so that there is not sense of individual identity), and 100 representing a total sense of self while living in community with others. He taught that this was impossible to achieve. See more.

I favor a scale with individuality on one side and connection on the other. There is not one preset ideal. The ideal points for emotional health and maturity typically fall somewhere in the middle range. The ideal points take into account all of the factors I talk about here, and vary with culture, role and power in the system and other aspects of social location that affect power and connection in the system.

A healthy interaction involves both standing up for one’s values and identity (individuality) and staying in connection with people who have different perspectives. What do personal names say about individuality and connection? Join me next week as I explore this question.