How a Fire Cooks in Groups of People: Thirteen Characteristics of an Anxious Congregation (And Anxious Leaders)

Systemic anxiety can ignite fires of emotional destruction in congregations and other organizations. Awareness makes it possible to manage and ease that anxiety before it reaches destructive intensity and bursts into emotional flame.

This tool guides leaders and members of congregations in recognizing the signs of systemic anxiety. Begin by remembering the mnemonic: How A Fire Cooks

Each of these relational approaches can apply to both individuals within a group and to the organization as a whole. As more people manifest one or more of these characteristics, the congregation as a whole becomes more anxious.

Patterns of relating spread in groups, whether they are destructive or constructive. If you notice that you as a leader are exhibiting these signs or that the organization you lead is exhibiting these sign, it’s time to take steps to manage anxiety. (See next week’s blog.) 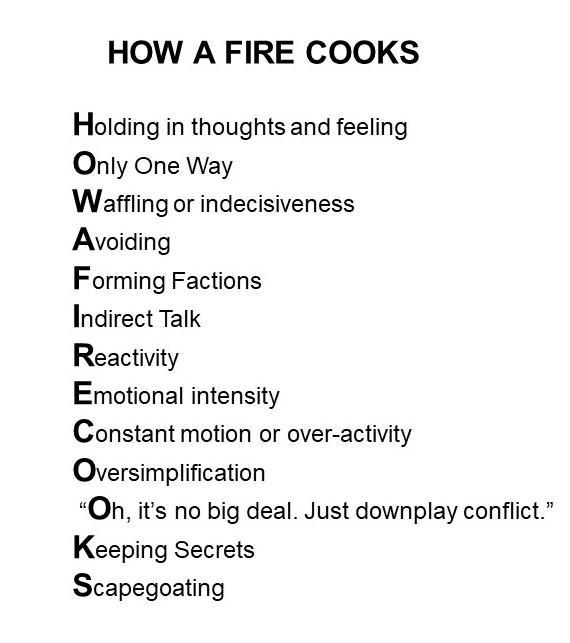 Holding in thoughts and feelings: When groups of people are anxious and troubled about things going on in the organization, they often hold in thoughts and feelings, rather than sharing openly. It may be because they do not feel safe to share, or because they are afraid that if they share they will explode in anger. Sometimes people hold in their thoughts and beliefs so that they do not have to risk changing themselves in any way. These held-in emotions and negative thoughts simmer below the surface. The lack of communication can lead others to think things are just fine when they aren’t.

Only One Way:  Anxiety can lead to tunnel vision in which individuals and groups of people have a rigid focus on only one option. This often manifests as an unwillingness or inability to listen to and consider other perspectives.

Waffling or indecisiveness: Conversely, anxiety can lead to difficulty or even inability to make a decision. Sometimes people agree with one person one day and then agree with another person with an opposing viewpoint the next day depending on the circumstances. Waffling can be an extension of conflict avoidance, not wanting to take a clear stand in case it is unpopular. When many people in a group do this, it leads to an unclear sense of vision and boundaries.

Avoiding: This often manifests as people looking away, joking or changing the subject to avoid a certain topic or to avoid a depth of conversation. Sometimes it manifests as over-talking. Talking over others prevents opposing perspectives from being heard. Congregations as a whole can fall into this pattern when certain topics are taboo, or issues and concerns about people or programs are avoided rather than discussed.

Indirect Talk: Indirect talk involves at least three people. Each person in this triad plays a role in an anxious system. One person is upset with another person. Instead expressing their concerns directly to the other person, the first person talks to third person such as a friend, a committee member, a colleague or a leader.  The person who receives this information (the third party) participates in the indirect talk if they allow themselves to listen to lots of details. This is called being “triangled.”  Sometimes the second person knows the first person is upset with them, sometimes not. If the second person knows there is an issue and avoids talking about it, but instead talks to their own third party, they also contribute to the indirect talk.

Reactivity:  Reactivity comes when people feel intense emotion which is out of proportion to the immediate situation and when they are not able to control or manage those emotions. Reactivity can manifest as impulsive or volatile speech, or unsuitable or inappropriate action. It can also be held internally with no words spoken or actions taken. Internal reactivity often negatively affects systems as well, by limiting a person’s ability to engage creatively with differences and through subtle non-verbal communication. Reactive emotions can include feelings such as anger, embarrassment, frustration, and disappointment. The reaction often takes place because something has triggered unresolved issues from the past.

Constant motion or over-activity: When people are anxious they often move from one activity to the next without pause for reflection. Organizations as a whole manifest this trait when staff work long hours on a regular basis, and programs and activities are scheduled tightly with little time for informal connection in between.  This kind of over-scheduling with no pause for rest and reflection increases personal and communal anxiety, which continues a vicious cycle of anxiety.

Oversimplification:  In anxious systems, people tend to focus on only one aspect of a problem. This leads to the Quick Fix Mentality in which people believe that if they could just take one specific action or fix one clear problem everything will be fine. In congregations the focus often becomes getting rid of or changing the clergy person, a staff person, or a key program.

“Oh, it’s no big deal. Just downplay conflict.”:  Congregations and other organizations downplay or minimize conflict to avoid dealing with difficult issues. The difficult issues then simmer beneath the surface and create problems. You can recognize when you or your congregation are downplaying conflict when you hear phrases such as: “That’s just his/her/their way.” “We’ve always done things that way.” “It’s no big deal.”

Keeping Secrets: Anxious systems often have people who are holding potentially embarrassing or destructive secrets with the intention of protecting themselves or the organization. Instead of helping a congregation, secrets fester beneath the surface. Actions and responses taken to protect a secret confuse others who have no idea what is at stake. Secrets can put others in physical or emotional danger when a perpetrator continues to be involved in a system, or when inappropriate and harmful past behavior is not acknowledged.

Scapegoating: Anxious organizations sometimes choose one person to blame for all the problems in the system. In congregations the scapegoat is often a leader or a disruptive member. In families it is often a child. The scapegoat becomes the focus of all the tensions in the group or organization. Scapegoating allows people to avoid taking responsibility for their own role or actions.

How A Fire Cooks: Remember these characteristics with this phrase.

Do you see any of these characteristics of anxiety in your own congregation, workplace or family? When have you personally been involved in these kinds of patterns? What was it like for you and for the group you were involved in?

Learn how to manage organizational and personal anxiety by joining me next week as I share the fourteen characteristics of Grounding Leader.