The Healing Side of the Family Triangle 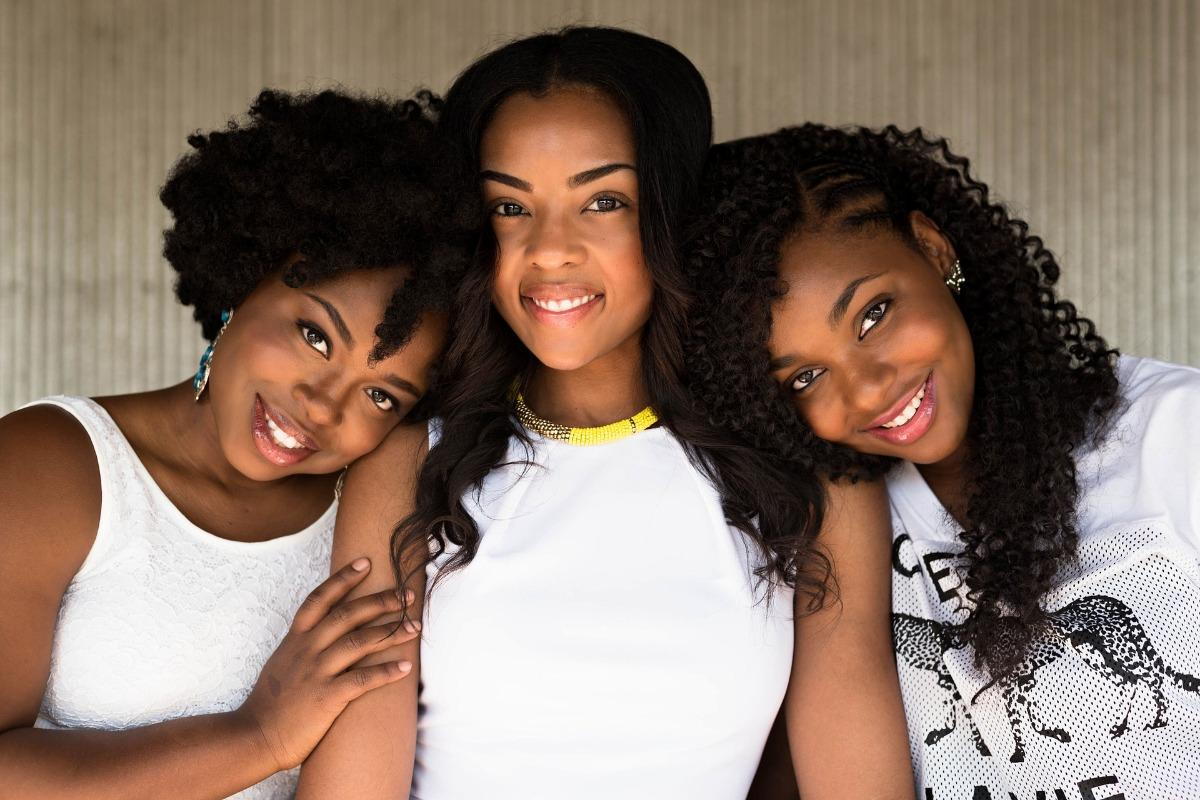 Have you ever heard of triangulation? Triangulation in relationships leads to family storms. But some triangles improve relationships. When can a third person help heal tensions between family, friends and co-workers?

In last’s weeks Step by Step Guide to Recognizing Relational Triangles, I examined how tension is often shifted between people in a conflictual situation.

Triangulation happens when people avoid dealing with a difficult interpersonal problem by drawing in a third party. The Avoidance Triangle comes in more than one form. (More below) In the long run these triangles lead to increased tensions or a cutoff in emotional closeness.

On the other hand, the Self-Reflection Triangle involves a third person who helps resolve an issue between two people, rather than contributing negatively to a situation or helping someone avoid tensions.

Here’s how to identify and create Self-Reflection Triangles.

When you intentionally involve another person who has no stake in the outcome of a conflict, and who is able to can stay neutral, this person can be helpful. A neutral outside person can help one or both parties to examine their own role. At its best this leads to increased self-reflection and self-awareness, which can lead to healthy change.

An outside professional or a support group can play this role as it did for Tomasso Angelo in our family dinner table scene. (More below.) But friends, relatives, clergy people, co-workers and even sometimes supportive partners can also play this role when they are able to follow these guidelines.

A third person can form a Self-Reflective Triangle if that person:

Directing Triangles Toward Health in Our Own Lives  gives a set of questions to consider as you work on identifying and building healthy triangles in your own life.

In the Angelo Family dinner table scene, Tom stands up with rage rising in him, and begins to intimidate his son Guido. He has done this many times in the past, sometimes ending in violence. But this time he stops himself and sits back down. No one else is at the dinner table besides his immediate family, but Tom has recently begun therapy.

His therapist doesn’t know the family except through Tom, but the therapist creates a Self-Reflection Triangle with Tom and his family. The therapist does this by helping Tom face his own inner demons and reflect on how to make change. The therapist takes a neutral stance and encourages Tom to deal with relational issues and the many layers of issues from his past that contribute to them.

One of Tom’s realizations is that he needs to reconnect with his best self. One way he does this is by going back to using his Italian birth name, Tomasso, rather than continuing to use the identity he took on as a teenager which is expressed through his American nickname: Tom.

Self-Reflection triangles do not bring a quick fix. At the end of this dinner table exchange, Tom feels anxious because he has set aside his familiar techniques of using authoritative commands, intimidation, violence and alcohol to allow him to squash all external conflict. 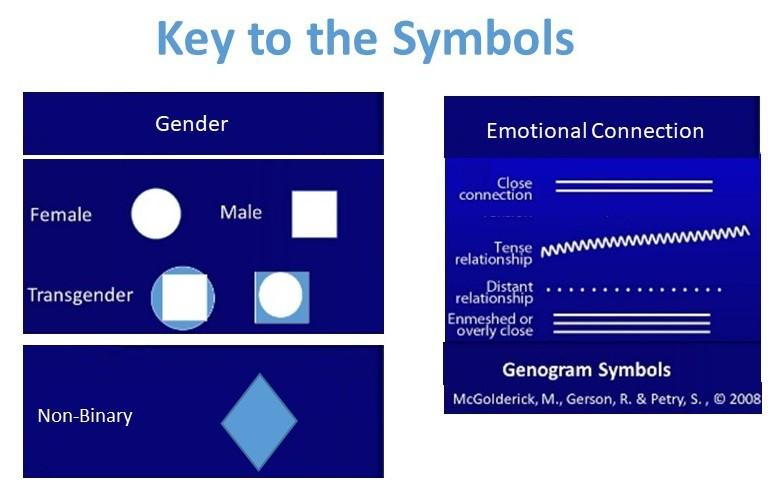 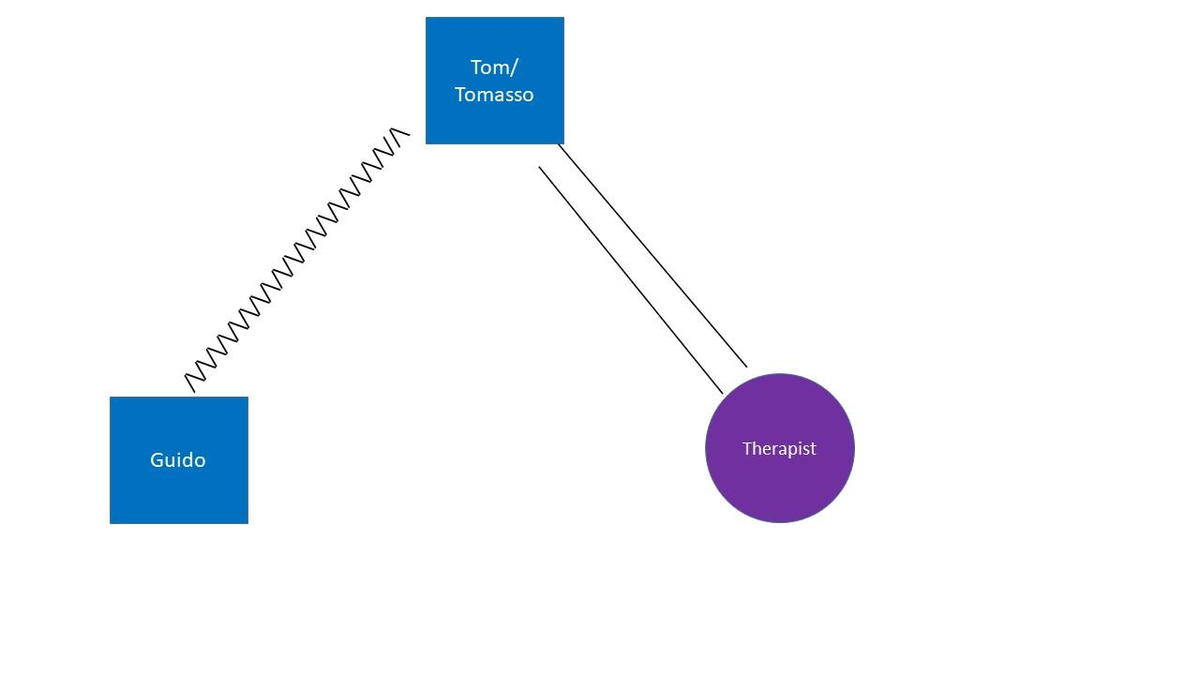 Another Self-Reflection Triangle Tomasso has invited into his life is his Alcoholics Anonymous group and particularly his relationship with his sponsor. Tom has struggled with addiction since the death of his infant son. AA and his mentor take a neutral outside stance and help Tom/Tomasso to take responsibility for his drinking and the negative consequence this has caused for him and his family. This group and his mentor provide Tom/Tomasso the support he needs to get himself out of unhealthy triangles.

In this case the triangles are between Tom, alcohol and a number of other people including various members of his family including his son, his own father, as well as internal conflicts Tom has with himself. These are called an Embedded Triangles.

A subset of the Avoidance Triangle, an Embedded Triangle prevents resolution of conflict between two people by drawing in a non-human component such as an illness, an addiction, a job, a pet or an activity. The non-human component distracts one or both people from dealing with the original problem. Sometimes the tension between two people is temporarily relieved. Sometimes it is escalated, but focuses at least in part on the non-human element rather than on one of the people. 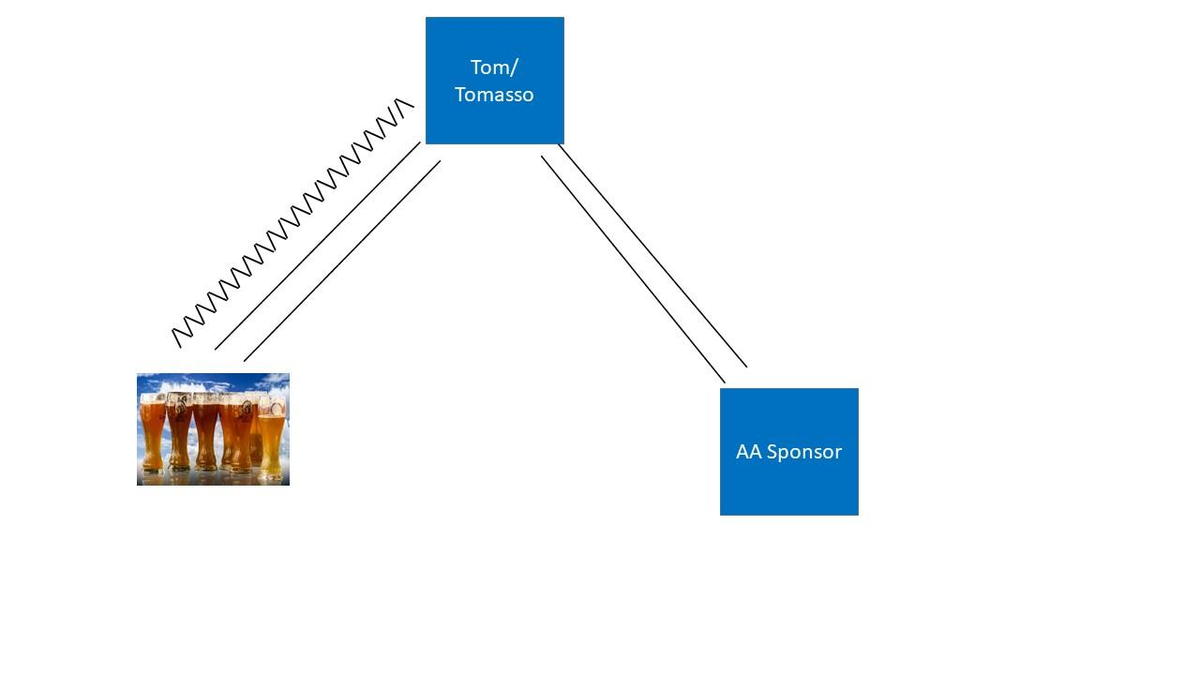 Though Tom is now using a Though Tom is now using a healthier approach to face his life problems by engaging in Self-Reflection Triangles, it is natural for the anxiety to appear to increase before it improves. In reality the anxiety doesn’t increase. Instead, it becomes focused on the actual points of origin of the conflict. This is a fragile time in the life of a family trying to change its patterns. It is very easy to slip back into old patterns or to create new destructive patterns rather than to do the deep work that leads to long term healing.

Finally, at the end of the dinner table scene Gina reaches out her hand to Tom/Tomasso and ask him what is wrong. She could engage in a Self-Reflection Triangle if she is able to listen while maintaining a neutral position on the other person, and encourage her husband to think through and resolve his conflict with the other person.

Join me next week as we look the complexities of Weighted Triangles.

Sign up for the Congremap newsletter on our Home Page.