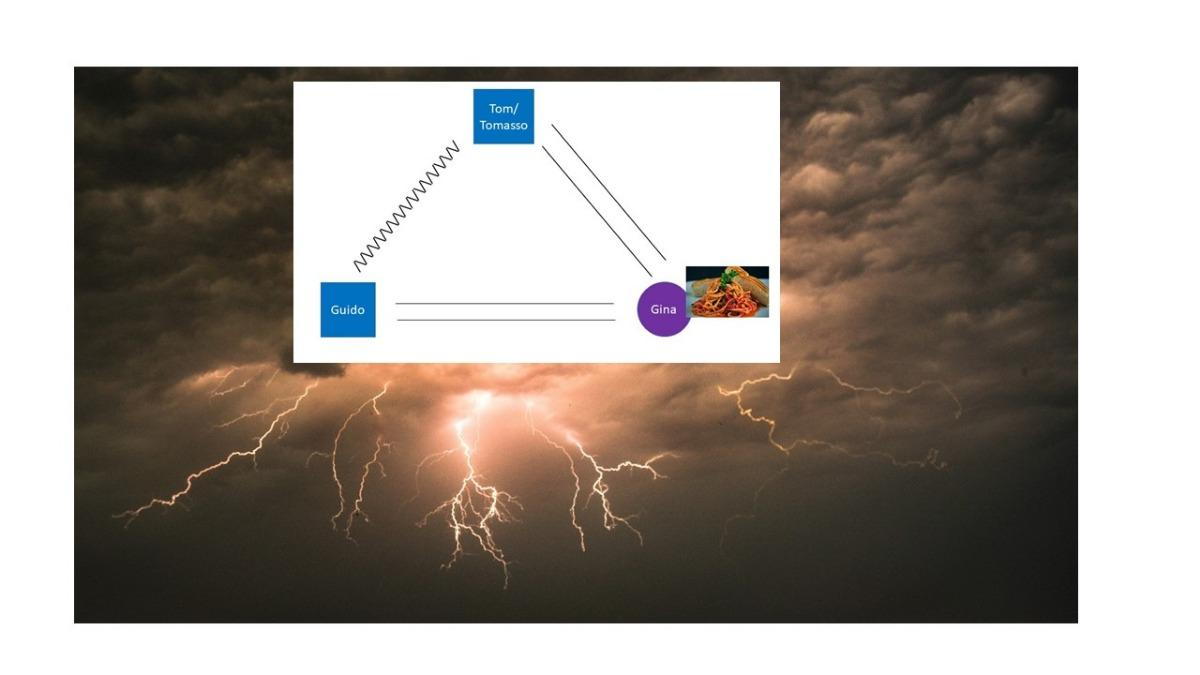 Do you want to improve your own relationships and help family, friends, clients and patients improve theirs? Try starting with relational triangles. Triangles are as common in human relationship as clouds are in the sky.

Conflict often starts in the triangles. Healing can start there as well.

The first step to healing involves learning to recognize triangles wherever they form and helping others to recognize them as well. When I first started working with family systems my eyes popped out at how many triangles filled my own family and friendships. The triangles had been right there all along, but suddenly I could see them.

Last week I presented a scene of family conflict that was also full of triangles. Could you recognize the triangles in the Angelo family dinner table scene? Did they remind you of triangles in your own family and friend groups?

Whether your own family storms are as dramatic or more low-key than that scene, the same skills apply for identifying this basic family systems pattern.

Here’s how to find relational triangles.

How Many People Are Involved?

Conflict often appears to involve multiple people at once. On the surface that is true, as is the case in the Angelo family dinner table scene. However when you look below the surface, conflict can sometimes involve a series of tensions between two individuals that are indirectly impacted by a third party.

Where is the Tension?

To analyze the Angelo family dinner table scene, start by noticing the tension.

The scene begins with an intense interaction between Tom and Guido. Tom locks eyes with his son Guido for a second before Guido looks away. Tom feels rage surging within and stands up to make himself as tall and intimidating as possible. Guido defiantly lowers his gaze, contracts his hand, pulls his arms towards his chest, and pushes back slightly from the table.

Who Speaks to Whom? Where is the tension in relation to this person?

Gina speaks a lot to the whole family. She does not talk about the tension. She talks about eating and things that happened during the day. Her cheery conversation in a forced perky voice intentionally distracts from the tension and makes it harder for others to address the tension directly. The family depends on Gina to smooth things over and bring some normalcy to the dinner table, but the tension remains. This is an example of an Avoidance Triangle. In an Avoidance Triangle, tension between two people is temporarily relieved by drawing in a third party.

In the following diagram the zigzag lines indicate tension. The parallel lines indicate a close, calm relationship. Gina tries to maintain a calm closeness with both Tom and Guido to diffuse the tension. In this scene she does this through the use of food and light conversation. 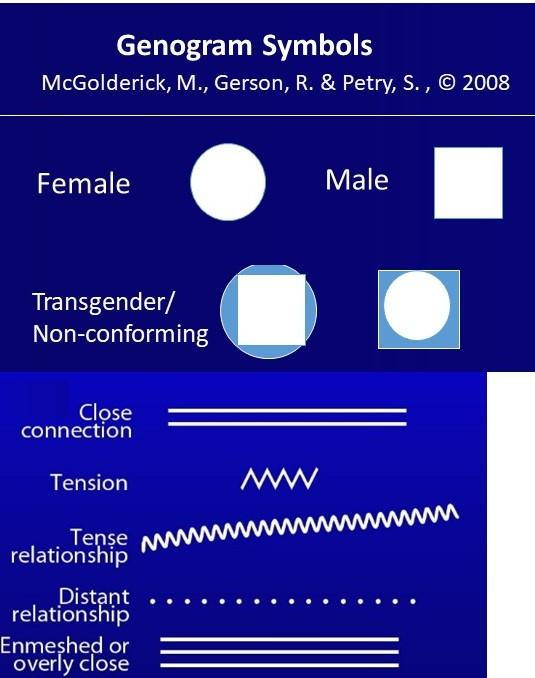 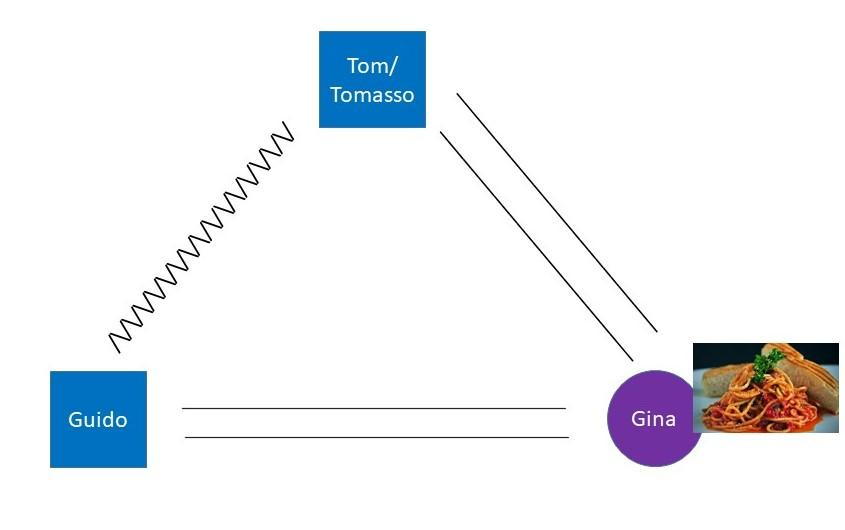 If Guido yells at his father or even tries to talk calmly, his father might become emotionally or physically reactive. Guido temporarily relieves the tension of his anger at his father by yelling at his mother. He knows his mother will not hurt him. 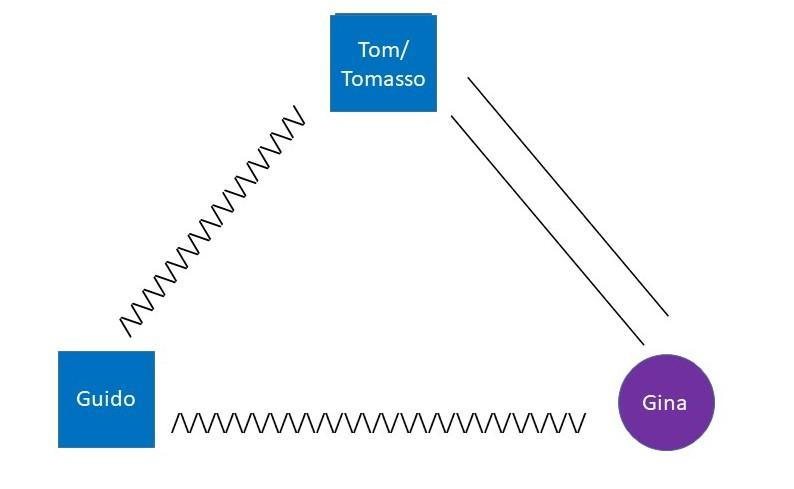 Fifteen year old, Sabina, complains about her brother kicking her under the table. There is clearly tension between brother and sister, but there is no indication of a major simmering conflict between them. Guido’s kicking is likely a distraction to displace his anger toward his father by taking it out in a safer way. His younger sister is not a threat to him. This is also an Avoidance Triangle. 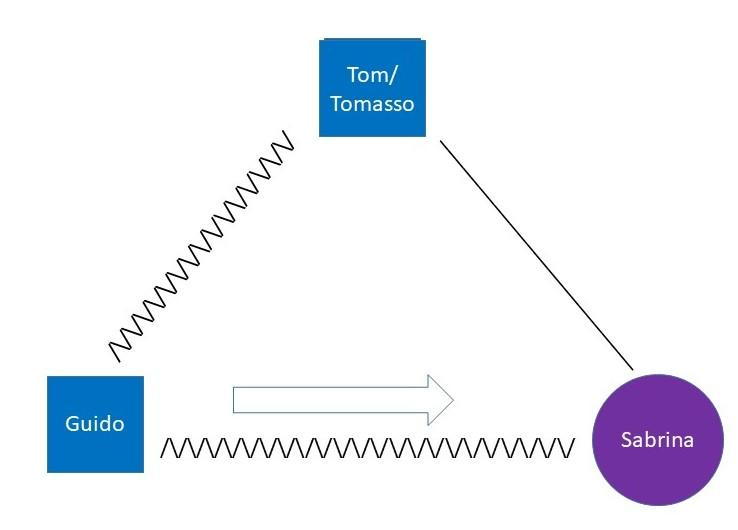 At the end Gina reaches out her hand to Tom/Tomasso. I will talk more about this next week as I talk about Self-Reflection Triangles.

Tom/Tomasso is uncharacteristically silent. We are able to look into his thoughts in this scene where we learn about other possible triangles. As we hear Tomasso’s thoughts, several other conflicts come to light. We hear about Guido’s failing grades and about Tomasso’s own abusive father. We also learn that he blames himself for the death of an infant son many years ago.

In your own life, you won’t know what someone else is thinking. However if you notice someone becoming unusually quiet, ask yourself what else might be going on? In addition, you can pay attention to your own thoughts and notice if a deeper tension lies with a person other than the one you are focusing on in the moment.

Additional potential Avoidance Triangles in this scene include:

Tomasso may have a pattern of directing his unresolved anger towards his own father onto his son, Guido.  This time he stops himself. 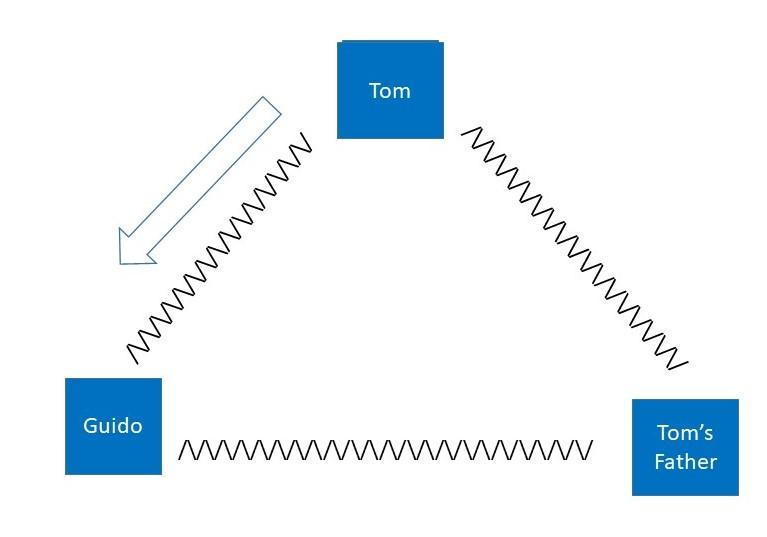 Tom-Guido-Guilt over death of infant son?

Tom may be displacing his feeling of guilt over the death of his infant son onto his living son, Guido. This would also be an Avoidance Triangle. 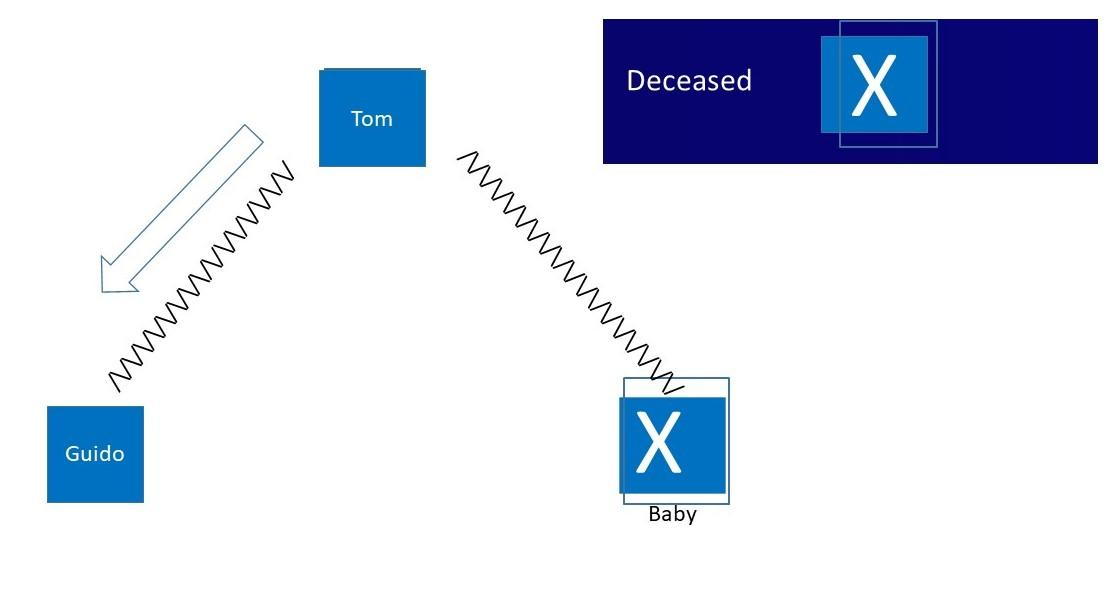 There are other triangles in this scene as well.

Join me next week as I describe how to identify Self-Reflection and Embedded Triangles in this scene.