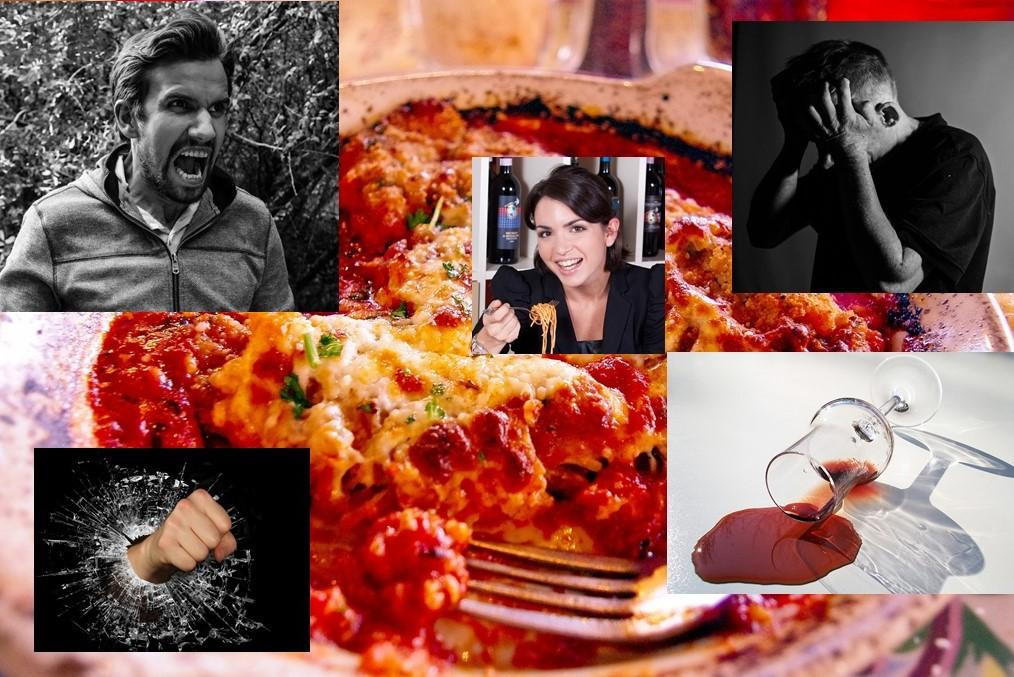 Tom leans forward at the head of the family dinner table, his eyes locking for an instant with those of his 17-year old son, Guido. Guido defiantly lowers his gaze, contracts his hand, pulls his arms towards his chest and pushes back slightly from the table.

Tom feels the familiar rage surge within, mixed with deep hurt. He begins to stand, reaching towards his full height, which in feet and inches isn’t tall, but in familial power is enormous. And then he stops, suddenly, lowering himself back to a seated position, remembering that he has chosen now to be Tomasso.

Guido, 15,  slowly releases the air from his lungs as he raises his eyes to stare straight ahead at the table filled with food.

Tomasso’s wife and Guido’s mother, Gina, picks up a serving dish and passes it towards Tomasso, breaking the tension with her cheery, “The food is waiting, mange!

The meal continues with Gina telling stories from her day in a forced perky voice. No one meets her gaze. She asks each family member about various aspects of their day with little response. Guido eats as fast as he can with his head lowered to his plate, mumbling one word answers to her questions, then finally yelling at her to stop pestering him.

Sabrina picks at her food and complains about her brother kicking her under the table. She tells her mother nothing important happened today.

Tomasso is uncharacteristically silent as well. Scenes from the past flash through his mind one after another. In one minute he sees himself slamming Guido’s report card on the table, pointing to the “F”, yelling obscenities at his son and shoving Guido against the wall. He sees himself hurrying to the familiar room in the basement and grabbing a bottle of vodka.

He is furious at himself for his anger. He remembers his own father red in the face, beating him with a belt. And just a moment ago he was red in the face and ready to strike. He feels an intense urge to rise from the table and open the basement door again, but thinks of the AA meeting he attended this morning. He mutters under his breath, “One day at a time.”

In a flash of memory he sees the dead body of his infant son many years ago, but forces the image down and away, swallowing feelings of guilt. He takes a deep breath and remembers the sense of anxiety and release as he spoke to his new therapist a few weeks ago about his name and what it means to him. He decided he will call his sponsor from AA after dinner.

Gina reaches out her hand toward Tomasso. “Tom, what’s wrong? You are so far away.”

“Please call me Tomasso,” he replies in an uncharacteristically soft tone. “I need to be Tomsasso now.”

Guido rolls his eyes, shoves his chair back from the table and leaves the room.

A relational storm unfolds in the Angelo family.

Relational storms can match the intensity of storms in nature, with all of their water, wind and fire. Even relational conflict that is understated and suppressed can unmoor those in the midst of it, just like a violent storm in nature or a loud and volatile argument between people.

In nature, the wind howls, the rain pounds, the lightning flashes and the thunder crashes. In families, voices raise, fists pounds, and words cut to the core.

But physical and emotional intensity, violence, rage, and hurt don’t have to end the story. Weathering any kind of storm is possible with the appropriate training and tools.

Just as storms in the natural world have a set of elements that interact and produce predictable results under certain conditions, relational storms build in predictable ways using common elements.

Just as storms in nature can often be managed and survived by following appropriate safety procedures, family and organizational storms can be managed and directed in healing ways by understanding the common elements. By recognizing the patterns they produce and applying specific tools and techniques, families and organizations can survive or even thrive in the midst of overwhelming complexities.

Can the Angelo family surmount the tensions and pull together in a healing direction? Understanding family systems patterns and learning to direct those patterns in healing ways could help.

The Storm Model of Family and Organizational Systems is designed to reveal underlying patterns and direct them towards health. The Storm model builds on the work of Murray Bowen and Edwin Friedman by adding a fresh organic metaphor as well as new concepts and terms that enhance previous models of family and organizational systems.

Join me next week as I begin to break down the elements of this relational storm and explore how to direct this and other families towards a brighter future using the Storm Model of Family and Organizational Systems.